Newsguy Jason Church just reported via metro that the DSCC just canceled two weeks worth of ads supporting Robin Carnahan’s run for US Senate. From the National Journal:

But at this point, it appears as though the DSCC moving money out of the state. The ad cancellations are an indication that national Democrats are growing bearish on Secretary of State Robin Carnahan‘s (D) chances against Rep. Roy Blunt (R), as polling shows Blunt with a sizable lead.

Carnahan has been struggling against Blunt even since before the primary in which Blunt scored more votes than all the candidates in the Democratic primary combined.

When I walked downstairs this morning for day two of the Smart Girl Summit the talk in the hallways centered around the news that the RNC cut funding from its GOTV campaign, particularly the deployment program, to curb costs. “Deployment” is when Capitol Hill sends out staffers to various districts to help the push leading up to the election. Many wondered why the RNC would do this when in the most important election cycle – odd even, for a non-presidential election – of our generation.

“The Republican National Committee has decided against sending Congressional staffers out on the campaign trail for traditional get-out-the-vote efforts, focusing its resources instead on mailings and other last-minute pre-election efforts, the committee confirmed Tuesday,” Roll Call reports. “The RNC traditionally runs the GOTV operation for Capitol Hill, which includes recruiting and registering staff that want to help the GOP at the state level… Doug Heye, a spokesman for the RNC, said the money would instead be used to fund other parts of its ’72-hour program,’ such as paid mail. Heye said the RNC made the decision after a review of deployments during the 2009 elections in New Jersey and Virginia.

A scan of the web pulled up few articles.

Shortly thereafter I got an email from RNC spokesman Doug Heye about the matter asking me to call him.

Heye explained that the RNC decided to trim GOTV and cut deployment because it “was a boondoggle. It was outrageously expensive. The average person deployed wasn’t knocking on doors, making calls all day.”

In light of the recent criticisms against the RNC, with the Hawaii conference, Steele’s cross-country tour, I can see why the RNC would want to rectify an ineffective and expensive program to ward off further accusations of wasteful spending – so long as the money saved stays with their GOTV efforts, which Heye explained that it would.

“We have 352 victory offices funded by us throughout country. We’ve crossed the 20 million contact threshold – contact in messages left, door knocks, phone calls. We’re ahead of where we were in 2008 and in the next five weeks we’ll have a minimum of two million more contacts.”

One of the concerns discussed in recent weeks by conservatives has included the push for early and absentee voters. Ohio has already started voting; Heye estimated that 40% of voters will have voted before election day. “It’s why people are going negative earlier.”

Heye also noted that “indexed for inflation, we will outraise 1994” and that the RNC is in the same position that the DNC was in back in 1996 with “no White House, no chamber of congress.” The RNC has raised $165 million, Heye disclosed. He admitted that it both hurt and helped that so many other groups and campaigns are taking donations and raising money in new ways with the explosion of conservative netroots and grassroots.

CREW, Citizens for Responsibility and Ethics in Washington, not to be confused with the infinitely more awesome crue, released a list of the Mostly Republicans We Hate “Crooked Candidates” for 2010. They’ve been getting play on a couple networks and former Democrat activist and CREW head Melanie Sloane has been insisting at every opportunity that her group is “non-partisan.”

Non-partisan in that seemingly every person listed as a title-holder on the group’s website is a democrat and that members have worked with SEIU, Tom Harkin, Al Gore’s climate protection initiative, and even Joe Biden (Sloane), which I think is important to mention considering the majority of CREW’s criticism is, momentarily, directed entirely at Christine O’Donnell who is vying for Biden’s old seat. The group is also funded by far left umbrella Democracy Alliance, an outfit founded by two former Clinton operatives who publicly lists George Soros as a major donor.

Their list of crooked candidates lists two from Missouri (but oddly, not a whisper about Russ Carnahan who is now at the center of a controversy being that he voted ‘yes’ on the stimulus and his brother’s windfarm received $90 million dollars in stimulus money) and of course, Christine O’Donnell. They make hay over the allegation from a disgruntled O’Donnell staffer but their website makes no mention of the below, among others:

Chris Dodd, one of the causes of the Fannie/Freddie disaster and they “express concerns.” Did they send a Hallmark card apologizing afterwards? Meanwhile their homepage is the equivalent of the graffiti on a girl’s bathroom stall wall, subject: O’Donnell. They pay a penance of going after fish-in-a-bucket target Charlie Rangel but a handful of obvious easy criticisms does not make a group non-partisan; consistency and lack of ties to a well-known progressive sugar daddy does. 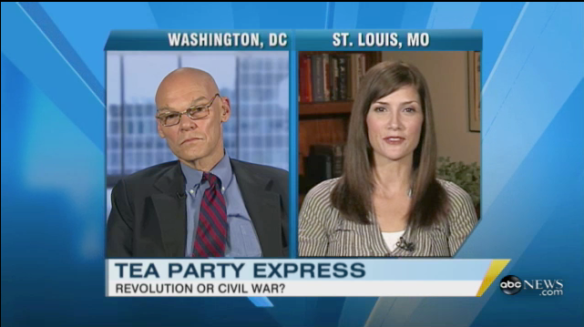 I received this hilarious email from listener Jim with the accompanying photo:

I’m sending his book back. His comments about O’Donnell were the trigger. He made a major mistake, he took off his mask and let us see who he really represents behind the scenes, big government and washington as usual politics. This tea partier has no desire to go back to the glory days of Hastert, Tom Delay, Trent Lott, and a Bush that could never seem to find his veto pen to control his own party. 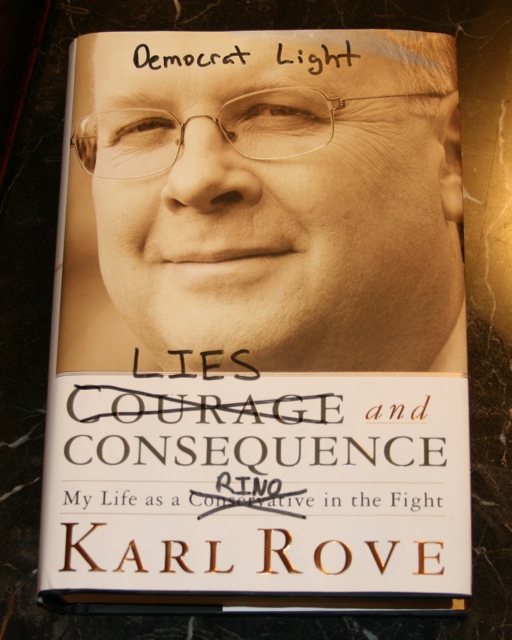 There has been some speculation that Rove is setting himself up as the bad guy in order to help fuel conservative voter outrage and assist getting people to the polls this November, which, if true, is bad strategy because it presupposes that voters aren’t already on their own merit sufficiently outraged. They’ve been doing just fine right now without the assistance of any political dark arts. The other alternative is that he is as beltway and blockheaded as they come and has effectively neutered for the future any credibility or influence he may possess. One is obviously less ridiculous than the other, but the more I hear him speak the more I wonder if there really is no spoon and it’s really the latter.