Nine years ago today I was a brand new, very young mother. I stood in my living room in my pajamas and watched the horror unfurl on live television, watching the fire, watching the first and then the second tower collapse, watching the Pentagon burn, seeing that a giant rut had been dug into the earth in Pennsylvania. Members of a theocracy had murdered over 3,000 Americans.

They didn’t just bring their war to American soil, they brought it into American living rooms.

In my living room, my five-month-old son played happily upon a blanket on the floor. It was a bizarre dichotomy: here was my innocent son, oblivious to what was happening to the country and his future. Standing over him was his young mother who thought that her biggest concern at this moment of his life would be the pain he felt from immunizations.

I have been political most of my life, only I campaigned for Democrat candidates. I had campaigned for Clinton his second term. At that moment I regretted it all. I had begun a transformation 14 months ago when I became pregnant, a transformation that was completed the moment that I realized, the moment that we all as a country realized what was happening on the morning of 9/11.

I became a conservative.

I have more than one child now. My trajectory has changed. My living room extends beyond the walls of my home. It extends to both coasts, to both the Canadian and Mexican border.

Every year we mark this somber day by remembering the men, women, and children who were murdered by an ideology that abhors freedom, that hates us with a passion greater than we can comprehend simply because we are free men. We remember the men, women, and children who did not ask for war when they simply showed up for work, for appointments, for day care that day. Their lives were politicized by an ideology who sought to burn a mark on our soil. It is our responsibility as a nation to not fall back into a false sense of safety, into apathy, romanticize the past and forget what happened.

That’s the first step to ensuring that it never happens again, in our homes, in this country.

Our prayers are with the families who lost loved ones nine years ago today and also with our country. 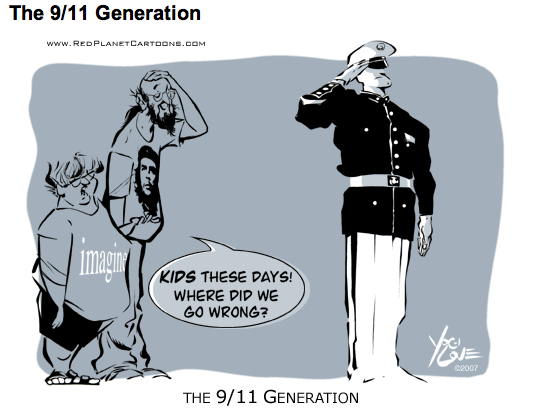 I can’t count the number of times I received email accusing conservatives of “driving people to violence” with they’re completely threatening manner of standing on an easement and waving a pocket-sized American flag. THE HORRORS!

I don’t expect the Statler & Waldorfs of the world or the media to apologize, but it’s fun to ask for one anyway. Eco-terrorist James Lee’s reported inspiration?

Lee said at the time that he experienced an ‘‘awakening” when he watched former Vice President Al Gore’s environmental documentary ‘‘An Inconvenient Truth.”

The sham of a documentary, the points of which Al Gore himself refuses to debate in public.

Dr. King’s dream was hijacked, alright. His family spoke at the non-partisan, non-political uplifting event at the Lincoln Memorial instead of taking part in this. What does that say to you?

*Update: check out the positivity and tolerance from the left on Twitter:

The overt ridiculousness I saw from white liberals towards black conservatives on 8/28 was unbelievable.

Great video from Marooned in Marin via P/O’ed Patriot shows powerful speaker Michael Warns and black republicans take on white liberals who condescend to ask them where their African religion went:

I interviewed Warns for PJTV; this fellow in this shot is the one who told Warns and the black republican group that they were “disgusting” and that he would “pray for them.”

I interviewed him as well; both will be up shortly.

What is so hard to believe about black conservatives? Why are they treated so scornfully treated by the liberal community?

Rep. Russ Carnahan reports that his campaign office was firebombed and a suspect is in custody. Uncool.

Police have arrested a 50-year-old man in connection with what appears to be a firebombing that caused minor damage at the campaign headquarters of U.S. Rep. Russ Carnahan, D-St. Louis.

Firefighters responded after witnesses called about hearing broken glass and later smelling smoke at the office in the 7000 block of Chippewa Street in south St. Louis.

“I was disheartened to hear reports tonight of a suspected arson attack at Congressman Carnahan’s campaign headquarters. While there is obviously a lot of angst and frustration among voters – violence is never the answer! We must all work together to establish a peaceful and prosperous political process. I’m glad to learn police already have a suspect in custody,” said congressional candidate Ed Martin.

The daily reports that a motive is not clear at this time. I’d like to hear what was. A sad story.

Sidenote: I take issue with this in Jake Wagman’s reporting:

Carnahan is weathering a tumultuous political environment. A year ago, several people were arrested at a Carnahan town hall forum after a fracas broke out between protesters and Carnahan supporters.

No. Protesters were harassed by people who identified themselves as Carnahan volunteers and people not even of the 3rd district, OFA bussed people in who were loud and disruptive at the meeting (I know, because they assumed me and the veteran who attended the townhall with me were with OFA and snuck us through the side door), and Carnahan supporters attacked a man they profiled as being a conservative. I and others have endless video and photographic footage of the evening. The “fracas” came from Carnahan supporters and there isn’t a police report or eyewitness that has stated otherwise. To report otherwise is disingenuous and the omission of the above implies that those targeted at the townhall contributed to the “fracas” and whether Wagman intended it or not, further implies that the “fracas” could be linked to the firebombing and that the perpetrator could be a tea partier. Also not cool.